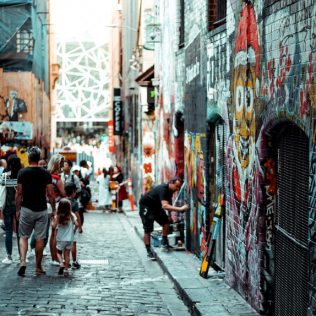 What makes Melbourne the world’s most liveable city?

With an incredible dining scene, fantastic shopping opportunities and a yearly calendar brimming with eclectic events, it’s easy to see why Melbourne continues to take the title as the world’s most liveable city.

Discover what incredible activities are on offer this winter in Melbourne with the help of East Coast Car Rentals.

Hot cider, warm cocoa, mulled wine – oh my! Get your winter bevvie fix and more when visiting the iconic Queen Vic Market this winter. From June 6 to August 29, Melbourne’s most loved night market returns, ready for hungry locals and visitors to feast from the hundreds of food stalls on display every Wednesday.

In addition to tantalising treats, visitors can peruse stands boasting homewares, arts and fashions as well as enjoying live entertainment from local musicians and performers.

2. Cheer on an Aussie Rules team

During the colder months in Melbourne, you won’t find the locals tucked up in their houses. Instead, you’ll find 80,000 of them cheering on their favourite team in the Australian Football League.

From March to September, the city comes alive with avid sports fans, raring to see which AFL team will take the top spot this season. Whether you’re a die-hard fan or an AFL newbie, it’s often said that no trip to Melbourne is complete without witnessing a game in show-stopping action.

Without a doubt, the best place to do so is Melbourne Cricket Ground. Here, not only will the game captivate you, but the crowd and atmosphere is electric beyond belief.

So, what are you waiting for? Don your team scarf, grab a hot dog and get ready to deal with a sore throat in the morning!

A post shared by Melbourne Cricket Ground (@mcg) on

Internationally celebrated for its vibrant art and culture scene, you can bet there are plenty of breathtaking musicals to watch this winter in Melbourne. Here are three you don’t want to miss:

Mamma Mia: The Musical – Packed full of Abba classics, contagious dance moves and a storyline that’s won the hearts of millions around the world, you can now enjoy the fun of Mamma Mia live on stage in Melbourne. Shows are running from July to September, so grab your ticket fast to secure your seat!

The Wizard of Oz – Join Dorothy and the gang as they journey through the magical land of Oz in search of the elusive wizard himself. But sure enough, their adventure doesn’t come without its problems!

A post shared by The Fox Theatre (@thefoxtheatre) on

Not only is the Melbourne International Film Festival one of Australia’s oldest festivals (it first launched in 1952!), it’s also one of the most popular. Every August, MIFF showcases the best in arthouse and short film, alongside cutting edge documentaries. It’s a great chance to see a fantastic array of films that aren’t often shown in conventional cinemas, in some of the city’s most iconic theatres and venues.

A post shared by What’s On Melbourne (@whatsonmelb) on

It’s not every day you get to marvel at works by some of the world’s most famous artists in the same room. Come June 9, art lovers will get the rare opportunity to view pieces by Pablo Picasso, Henri Matisse, Vincent van Gogh, Jackson Pollock and Salvador Dalí at The National Gallery of Victoria, all on loan from New York’s Museum of Modern Art. Many of these works haven’t been seen in Australia before, so if you’re a fan of the greats, it’s an exhibition not to be missed.

A post shared by National Gallery of Victoria (@ngvmelbourne) on

6. Fall down the rabbit hole at Wonderland

Wonderland is the interactive and immersive exhibition allowing visitors to enter the magical rabbit hole that was once frequented by Alice herself. Follow the journey of this classic tale, from the 1951 Disney original to the 2010 Tim Burton adaptation, through an array of activities, displays and artistic exhibitions showcasing the inspiration and thought process behind Alice in Wonderland.

With so much to see and do in Melbourne this winter, don’t run the risk of missing out on the fun. Call the team at East Coast Car Rentals today to book your perfect car hire for your East Coast adventures.