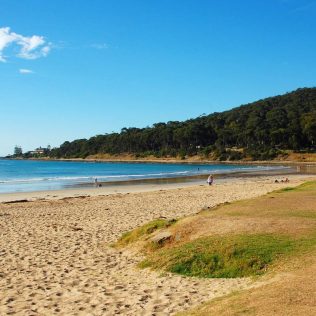 When people think of Australia, especially those that come from outside of the continent, they invariably think of kangaroos, cork hats, the Sydney Opera House, dangerous animals over land and sea and the vast expanses of desert in the middle. While many of these presumptions are actually correct, what many don’t realise is that Australia is home to dozens of quaint villages, hidden hamlets and intimate towns. But where are these elusive settlements? Let East Coast Car Rentals be your guide!

Driving into Central Tilba, New South Wales, you would be forgiven for thinking that your hire vehicle had suddenly transformed into a time machine, such is the hamlet’s charming historical appeal. This tiny settlement appears to have been constructed straight from the pages of a Hans Christian Andersen fairytale, replete with a collection of his characters. A blacksmiths, a cobbler and vintage sweet shop are all found on its narrow streets – don’t be surprised if you happen upon a candlestick maker’s.

The ABC Cheese Factory that forms the main commercial attraction to the town is open for fascinating tours into the fromage-making business – be sure to collect your free samples at the end, then content yourself with gazing at the picturebook scenery around you.

South Australia’s Coober Pedy can get insanely hot – in the summer, daytime temperatures rarely drop below 35 degrees Celsius, and never below 20, and frequently nudge into the 40s, according to the Australian Bureau of Meteorology.

As such, the vast majority of Coober Pedy is underground. Because of the extreme heat, an entire network of subterranean tunnels connects shops, pubs, and cafes – all below the surface. Houses are more caves, bored into the hillside, and even the places of worship are underground.

And the reason the residents decided living underground was a great way to escape the heat? Coober Pedy is home to more than 70 opal fields – the precious gemstone has been excavated here for generations, and is the largest opal mining area in the world. Hence, it stands to reason that the founders of Coober Pedy were something of a dab hand when it came to digging tunnels.

Mission Beach, found (with great difficulty) in Queensland, is the archetypal ‘hidden gem’ that doesn’t abuse that oft-used cliche we have adorned it with. This place really is hidden – behind a verdant, sprawling rainforest well off the main highway. Australians know that it’s there – at least the local Queenslanders do – but they rarely seem to frequent the place, and we are at a loss as to why. A beach resplendent with shimmering sands, uninhabited islands accessible by boat and the great forest that overlooks the place await the intrepid traveller – and you’ll be completely by yourself.