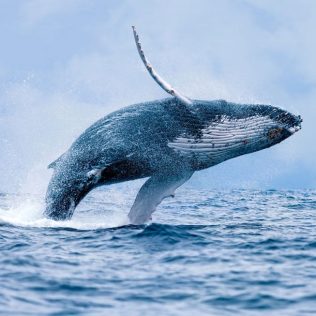 Between May and November, something magical happens along Australia’s east coast. Some of the world’s largest mammals start to make their way along migratory routes that stretch for thousands of kilometres, gracing lucky onlookers with a glimpse of their massive forms.

Driven north by Antarctica’s winter chill, humpbacks and southern right whales roam the waters off Australia during the winter months. Whale watching is a unique experience worth organising a road trip for.

To see these massive creatures for yourself, check out the five top locations to see whales on Australia’s east coast.

The fifth-largest whale species, humpbacks are easy to spot because they’re active at the ocean’s surface.

Humpback whales make Hervey Bay a regular stop on their southern migration as they head back down to Antarctica after wintering further north. The fifth-largest whale species, humpbacks are typically easy to spot because they are active at the ocean’s surface. Their population has bounced back in recent years, so you have a good chance of seeing them. After going as far north as the Great Barrier Reef, whales start to trickle into Hervey Bay on their way south around mid-July. By the beginning of November, most humpbacks will have left Queensland’s waters.

Once almost hunted to extinction, endangered southern right whales now glide through this harbour 80 kilometres from Adelaide. The  sheltered bays of the Fleurieu Peninsula make an ideal breeding ground for the great creatures. They typically set up camp in the area between May and October, with the best time to see them being in July and August. They lumber along at less than 10 kilometres an hour, and come within 100 metres of the shore, so they are easy to spot.

Port Stephens is home to long stretches of sandy beach and a population of bottlenose dolphins. It is also graced by humpback whales as a regular stop on their migration routes. The whales pass through as they head north between June and August, and again as they make their way south from September to November.

During the southern migration, you might see mothers with their new calves. One of the best places to go whale spotting is in Tomaree National Park. The summit of Mount Tomaree gives you panoramic views of Port Stephens’s pristine waters.

Tasmania used to see massive numbers of southern right whales – so many that there were nine whaling stations in Hobart, which ravaged the whale population. Whales remain an endangered species, but as they recover sightings are becoming more common. One of the most scenic places to spot them is Great Oyster Bay, where both humpback and southern right whales glide through the calm waters in May. Taking a wildlife cruise in this area is an awe-inspiring way to see the whales tracing migration routes they have followed for centuries.

The southern right whales return annually to the calm bays near Logans Beach to calve. Logans Beach comes complete with a whale-watching platform, and from this vantage point you have a good chance of spotting whales between June and September. These whales got their name from whalers, who considered them the ‘right’ whale to hunt as they were slow moving and easy to spot. They hug the shore in this area so you might even see the mothers playing with their newborn calves.

Start planning your whale watching adventure by checking out our range of vehicles. Whales (and good times) ahoy!