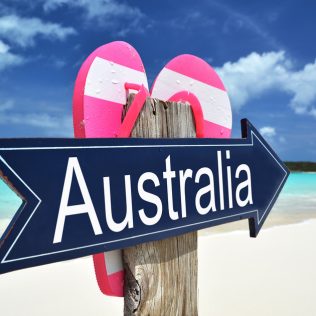 There can be no doubt about it, Australia has a whole bunch of crazy place names going on. Perhaps you once, by chance, set your satellite navigation system to Come By Chance, New South Wales, or took a challenging hike up Mount Buggery. Either way, we’re not sure that we’d like to visit Nowhere Else, South Australia, but we’re sure it’s a lovely town.

Nothing makes a great travel photo like a snap taken next to an amusing road or village sign, so leap into your hire vehicle, clear some space on your camera’s memory card and set out on a wild ride to Australia’s strangest place names.

Banjo Paterson, the Australian bush poet most famous for penning ‘Waltzing Matilda’ immortalised this locality in a poem:

“But my languid mood forsook me, when I found a name that took me,
Quite by chance I came across it -`Come-by-Chance’ was what I read…”

With a population of just 187 at the 2006 census, according to the Australian Bureau of Statistics, Come By Chance was named when, in 1862, George and William Colless bought a sheep ranch in the area, and called it by that name after their great surprise at being able to actually buy something, anything, in the remote area. The town was eventually called after the sheep station.

Each year, the tiny settlement hosts its famous picnic races – but you’ll have to take a drive up to Come By Chance to see what that entails.

The settlement got its unusual name from a fisherman that lived there in the 19th century, George Lawson. ‘But George Lawson doesn’t have either of those two words in his name,’ we hear you cry. Well, old George was originally from the English county of Yorkshire, who are colloquially known as ‘Yorkies’.

The Yorkeys Knob sign attracts a great deal of attention, and despite several attempts to rename the settlement ‘Yorkeys Beach’ by the authorities, locals have an attachment to the original moniker, so Yorkeys Knob has held firm.

Drive north of Cairns, take an obligatory photo, relax on the beach and leap in for a refreshing swim in the clear waters of Yorkeys Knob.

Don’t be fooled by the unflattering name – Foul Bay is, in fact, a gorgeous area on the Yorke Peninsula popular with surfers, sunbathers, hikers and rock climbers alike. Camping and fishing are also much-loved pastimes. But how did Foul Bay attract such a foul name?

Blame the first man to circumnavigate Australia, and to realise that the huge landmass was, in fact, continent-sized: Captain Matthew Flinders.

Trying to secure his ship near the bay in 1802, his crew could find no solid bed on which to lie the anchor. In a rage, Flinders exclaimed this ‘a foul bay.’

There are, in fact, two Nowhere Else’s, one in South Australia and one in Tasmania. This means that it can never be said that there is nowhere else like Nowhere Else. Unfortunately for the locals, the road sign that points in the direction of Nowhere Else, South Australia, is the constant target of thieves looking for an amusing souvenir.

“People sort of look at it and say ‘Oh that’d be good to have hanging in the shed or up above the bar’ or something like that, so they acquire it,” Elliston District Council CEO Mary Deakin told ABC.

But what of that bizarre name?

“It’s a story of a couple of shepherds who set out to find the shepherd’s hut and because there was a lot of trees like she-oaks in that day, they found it very hard to see. When they were coming up over a rise, one of the guys said ‘If it’s not over this hill it’s nowhere else’,” Ms. Deakin concluded to ABC.

So head on down to Nowhere Else and take a picture of the sign, but don’t go stealing it!

Mount Buggery (both of them), Victoria

Calling one mountain ‘Buggery’ could be put down to circumstance. Two? In the same state? That’s just plain strange!

Apparently, one of the Buggerys, found in the Alpine Shire within the Alpine National Park, just outside of Melbourne was named by a member of the​ Walking Club who hiked to Mount Selwyn with five others, then onto Speculation via the Barry Mountains. After this, he took the Crosscut Saw to Mount Howitt and ended up in Merrijig alongside the Howqua River.

It wasn’t until the party reached Howitt that discernible hiking tracks appeared. As the unknown mountain loomed into view, the man grew dismayed at the prospect of another tough, uncharted ascent. Overcome with anger and frustration, the hiker exclaimed: ‘What another bugger! I’ll call this mountain Mount Buggery.’

Have you seen any strange place names whilst driving through our country?