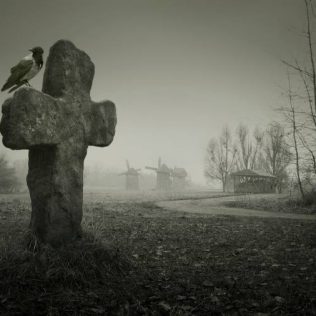 Bad goings on in bag of bones Brisbane: 3 of the city’s scariest spots

October shuffles on, like an aimless zombie wandering in the dark. Hallowe’en draws darkly closer and the East Coast Car Rentals Writing Wraith, rotten from his macabre march across Adelaide and terrible trek to Sydney, points his crumbling fingers in the dank direction of big, bad Brisbane. The creepy capital of Queensland is home to a ghastly gallery of ghouls, lurking in the ancient cemeteries and old abandoned houses, just waiting to crawl out from the floorboards … Remember to take your torch with you in your hire car and remember, none of this is real … or is it?

The City Hall is the magnificent centrepiece of Brisbane, and allegedly home to a lost soul. Since the 1950s, ominous footsteps have been heard pacing the corridors, leading to a single, sinister place – Room 302. This room is supposedly where an old caretaker took his own life during the wartime era. A foreboding feeling pervaded over the sorrowful area during its later use as a photography darkroom, which was later abandoned due its oppressive atmosphere.

Disappointingly, the GhostBusters were not sent in to remove the entity, but carpenters were, taking out the interior walls of the room which then, worryingly, became part of a children’s play area. Mysteriously, the caretaker has not been seen or heard since his room was demolished. The City Hall remains a beautiful building, elegant and symbolic, a true icon of Brisbane and one that should be visited regardless, ghost or no ghost.

As with Adelaide and Sydney, abandoned jails represent a desired residence your everyday restless spirit, and Brisbane is no exception. Boggo Road Gaol is perhaps the most infamous in Australian history, and the old shell of the building is still tormented by its violent, melancholy past. The last man to be hanged in Queensland, a murderer named Ernest Austin, is said to still stalk the corridors over 100 years since he took the short drop and a sudden stop. The story goes that Austin made a hellish pact with the Devil, offering to gather him souls from the land of the living in order to save his own from ‘the hot place’.

The apparition of Austin’s face supposedly appeared at the prison doors of newer inmates with a glowing red eyes – anyone caught in his gaze would be transfixed, and Austin would materialise in the cell, throttling to death the unfortunate captive. Regular tours operate through Boggo Road Gaol, some offering different themes – the ‘Escape’ tour explains how intrepid prisoners plotted daring bids for freedom. The ‘History’ tour takes a fascinating journey through the jail’s past and the ‘Ghost’ tour … well, you may end up meeting old Ernest Austin after all.

Cemeteries are eerie places to visit at the best of times. The one at Goodna is no different – it was the place of burial used by a nearby former lunatic asylum (but of course) so the ghosts wandering here aren’t just normal ghosts, they are criminally insane ghosts. Wonderful.

Ghosts don’t often touch the fleshy living, either because they can’t, like Patrick Swayze in ‘Ghost’, or maybe they just don’t want to. Not so with this place.The scary thing with Goodna Cemetery is that visitors often emerge looking as though they have been dragged through a bush backwards, scratches and cuts slicing into them. Terrifyingly, after some sustained physical abuse, one man leapt into his car in a desperate escape attempt, but found that even with his engine running, the wheels wouldn’t turn. Cowering for the entire night, the man finally managed to move. When he parked up, he found heavy gashes along the length of his vehicle, as though it had been anchored in place by an unseen force.

If you are feeling particularly brave whilst in the vicinity of Goodna Cemetery, try this. At midnight (when else?) if you cover your car in flour, drive past the godforsaken place very slowly (that’s right, you don’t even have to go in) then inspect your vehicle once you stop, the countless fingerprints of the nameless dead will be imprinted in the white powder.

Please don’t use your East Coast Car Rentals vehicle if you attempt this, as we don’t want the fingerprints of a criminally-insane ghost on our car. It wouldn’t be good for business.