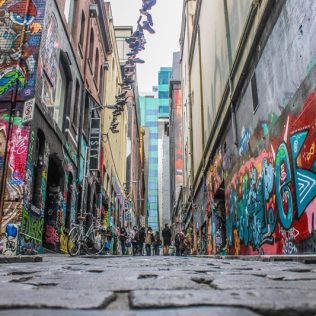 Maybe it shouldn’t be surprising that a city characterised by its extensive street art also likes to hide away some of its best bars within narrow laneways, dark alleys, and unassuming corners. However, while many cities would be satisfied merely tucking entrances away, Melbourne isn’t. Instead, pass through fridge doors, give out secret passwords, explore behind bookcases and find yourself in Wonderland.

Grab your hire car from Melbourne airport, choose your sober driver, and get a taste of Melbourne while discovering these hidden bars.
1. Loch and Key In Melbourne’s oldest pub, Captain Melville, take a look behind the bookcase and follow the rickety staircase up into Loch and Key. A warren of dimly-lit nooks and crannies awaits exploration, linked together by rich timbers and a quaint cabin feel. Mounted deer heads, couches and old-fashioned coffee tables add to the atmosphere. Open till 5 am, Loch and Key serve boutique beers on top of a range of cocktails. The capable bartenders will concoct a creation for you based on what you’re craving if you can’t decide for yourself. 2. Jungle Boy To venture into a courtyard bar filled with greenery and tiki masks, pass first through the fake fridge located at the back of a sandwich shop on Chapel Street in Windsor. Enter the cooler, and within you’ll find a cosy laidback space filled with ferns and zombie cocktails. 3. The Croft Institute If the creepy vibe is what you’re wanting to experiment with, look no further than the atmospheric Croft Institute. This asylum is for those needing a cocktail injection (served directly from a syringe) and we’d applaud the three levels of dedication to a clinical theme if it weren’t for our straitjackets. There are also bars on the windows, so it’s a good thing that the drinks are too good to really think about trying to escape. Laboratory experiments and old hospital beds await your check-in. 4. Beneath Driver Lane Blues, whiskey, and basement dreams. Whip these all into a cocktail bar, and you have Beneath Driver Lane. You’ll find live music in this old bank vault turned bar, that, as you might have guessed from the name, is found at the end of Driver Lane. Only a discrete doorway, and a window barely showing above the pavement, give away that this bar exists. One of the best things about this secret bar is the delicious food that’s served till the early hours of the morning. Plus, the melted wax, goblets of fire (or close enough), and liquid nitrogen cocktails bring a Diagon Alley vibe to the bar that seals the deal. 5. The Attic at Black Pearl When being secreted away within a laneway isn’t enough, consider instead a bar hidden within a bar. Above the Black Pearl, a venue well worth visiting all in itself, is The Attic. Think American speakeasies, dark leather, superb cocktails, and access via buzzing in through a closed door. Hanging antique lighting will greet you, as well as an arched window at one end and high wooden-beamed ceilings. Don’t forget the whiskey tastings available either. 6. StoryVille Though it’s tucked down an alley off Lonsdale St, this is probably the least hidden bar on Melbourne’s list. ‘Once upon a time…’ whispers the words decorating the entrance, and whether they’re promise or warning, it’s for you to decide. Ascend into the fairytale by stairs leading into the dark maw, and emerge into Wonderland, Narnia, Neverland – think of a tale and you’ll find it within these walls. A tangled trunk of an enormous fig tree gives you entrance into the fantasy. Glowing toadstools grow from the brick walls, rope swings provide alternative seating, and Tinkerbell’s golden birdcage is rich with magic. In one corner signposts guide you to the different corners of the fairytale, and the library boldly displays painted books that shaped our childhoods, and some that we only dared enter as adults. Roam through the fables, before stepping up to the bar and choosing your own adventure. Each cocktail immerses you further into the story, falling deeper down the rabbit hole. Crafted straight from the world’s themselves, this halfway point brings the written word to life. Do you dare enter? 7. Berlin Bar The theme of this bar is given away in the name, however, the execution is excellent. Divided between west and east, choose between opulence or a grittier feel while Charlie Chaplin and his classic film ‘The Great Dictator’ takes centre stage. Between the sides, the difference is notable. Luxurious booths and chandeliers are a stark reality next to war-stricken crates sitting beneath camouflage netting, security spotlights, and dangling lightbulbs. Cocktails tie in with the post-modern German culture time capsule that this bar has achieved, cleverly named as well as cleverly made.

8. Pizza Pizza Pizza A pizza joint in the front, hidden bar in the back. Could you get a better mix? However, gaining access to the tucked away retro-inspired bar isn’t as simple as waltzing through. Work into the conversation a question about seeing their ‘secret menu’, hold your breath that they won’t just give you an odd look, and pass the test for entry. Make sure you grab a slice for the road on the way out, as well. If you can ever bring yourself to leave a place offering both pizza and cocktails. With the hidden bars showing another side to the city’s vibrant and quirky nature, following vague directions has never been so much fun. So what are you waiting for? Head to Melbourne in your hire car today, stay within walking distance or choose a sober driver, and discover the secrets this city holds.