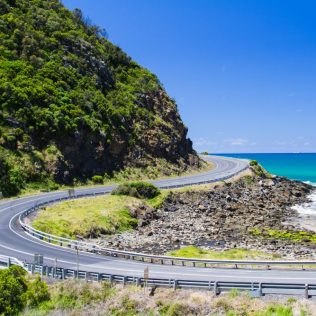 5 unmissable places to visit along the Great Ocean Road: an Australian classic

There’s little point arguing past the Great Ocean Road when it comes to the quintessential Australian road trip. Famous the world over, the Great Ocean Road was built as a permanent memorial to those who lost their lives during the First World War. It stretches almost 250 kilometres, hugging Victoria’s southern edges. Though it can be driven in a day, the Great Ocean Road is best enjoyed at a leisurely pace, allowing you to soak in each of the many sights along its big length.

Famous the world over, the Great Ocean Road was built as a permanent memorial to those who lost their lives during the First World War.

Three days is perhaps the optimum amount of time to spend travelling the Great Ocean Road, so book a couple of nights before your trip and get set. Here are five sights that should be top of your list – make sure your camera is fully charged!

Easily the best-known of the Great Ocean Road’s attractions, the 12 Apostles are soaring limestone pillars that rise from the depths of the Southern Ocean. Aged at around 10-20 million years, the Apostles used to be cliffs that were gradually formed into the towers you see today after millennia of beatings via wind and wave.

There are only eight Apostles standing today – the sea has reclaimed the other four, but the original name remains. No matter which way you view them – and there are several lookout points – you’re guaranteed an outstanding photograph.

Found just a short way from The 12 Apostles, the London Arch is composed of the same limestone as its more-famous neighbours. It was originally named London Bridge, as it featured two naturally formed spans that linked to the mainland, reminiscent of the British landmark. One of the archways collapsed into the sea in 1990, and two unfortunate tourists, who had ventured out to the bridge’s furthest point, were left stranded – they had to be rescued by helicopter!

Today, the London Arch can be viewed at three different lookouts – let’s hope the remaining span holds up for you!

Of the 10,685 beaches in Australia, Bells certainly ranks among the most famous. Surrounded by sheer cliffs that offer unparalleled views of the pounding surf below, Bells is world-renowned as a paradise for those who love to ride the waves – and what waves they are.

Bells is world-renowned as a paradise for those who love to ride the waves.

Rearing to heights of up to seven metres, the swells at Bells are not for the faint-hearted – or the novice. If you’re driving the Great Ocean Road during the Easter holiday, you might happen upon the world’s best surfers competing in the Rip Curl Pro Surfing competition. Atop the cliffs, you’ll have a better view than anyone as the pros battle it out for top spot!

This isn’t a walk that you can do in a day, but when it looks like this, why would you want to? It’s nearly 100 kilometres in length, so if you want to see it all, you’ll need to book in a few days. A designated trail runs its whole length, and if you’re really hardcore, you can do so with a tent and the rest of your gear on your back, living off nature.

If you don’t quite fancy braving the Great Ocean Walk by yourself, there are several walking companies that can give you a guided tour. These include food, accommodation and luggage transportation, and last between three days to a week. If you’re a little pushed for time and simply don’t have the days to walk the entire length, go for a trip from Port Campbell to Apollo Bay – this will ensure that you see the Great Ocean Walk’s many highlights.

‘The best way to spoil a good walk’. This famous quote has been attributed to several historical figures, among them Winston Churchill and Mark Twain. Well, Churchill and Twain may not have liked the sport, but we bet they never played golf with kangaroos. That’s right – we said kangaroos. Out on Anglesea Golf Course, you can take in the full 18 holes as kangaroos bound across the green, loafing under the eucalyptus trees or making a nuisance of themselves near that tricky water hazard.

If you’re not a golfer, there’s no need to worry – you can still get to see the kangaroos on a special tour that doesn’t involve yelling ‘Fore!’ at every hole.

When you take a tour of the Great Ocean Road, do so in the comfort of your very own rental vehicle. Contact our friendly team to find out more.