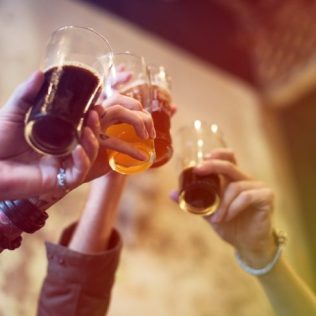 Best breweries to visit on the Gold Coast & Byron Bay

Australia’s enviable climate and seemingly endless summer make it the perfect location to enjoy a beer or two in the hot sun. We’re a nation that loves its beer, and while Deloitte notes that overall consumption of the amber Aussie delicacy has declined in recent years, there’s a relatively new subsection of the market that is booming.

We’re talking about craft beer, and with microbreweries apparently springing up in just about every corner pub in the nation, those who enjoy the occasional schooner are spoilt for choice. The Gold Coast is home to some of Australia’s best craft beers, and if you’re visiting the Sunshine State many of them are within easy driving distance.

We’ve compiled a list of our favourite microbreweries in the region, perfect for anyone keen on sampling the local lagers during their visit to the Gold Coast.

A post shared by Fortitude Brewing Company (@fortitudebrewing) on

1. Fortitude Brewing Co. One of the most popular entrants into the burgeoning brewery boom, Eagle Heights’ Fortitude Brewing Co. has made a huge splash in the past five years. Initially opening their cellar door in 2012, founders Ged, Jim and Ian have grown Fortitude into one of the region’s most enduring craft beer staples. With 15 different varieties under a pair of labels, Fortitude have a range to suit even the most discerning drinker, and a tactical partnership with the neighbouring artisanal cheese-making factory means there’s plenty of food on offer to complement your visit. 2. Black Hops Brewery After brewing their first beer in 2014, the team behind Black Hops Brewery in Burleigh Heads have quickly emerged as one of the most creative outfits on the coast. Their success in delivering a unique product to a number of popular local bars led to the opening of the Black Hops Taproom in 2016, which has quickly become one of the best spots to lean and chat while enjoying a selection of Gold Coast-inspired beers. From familiar craft standards such as pale ale and Australian Saison to the offbeat Eggnog Stout and Bacon Butty IPA, Black Hops are experimenting with some terrific flavours. Be sure to get in quick, however – it’s standing room only at the Taproom, but it’s worth the trip for their popular tasting paddle.

A post shared by Balter Brewing Company (@balterbrewers) on

3. Balter Brewing The brainchild of Australian pro surfers and local legends Mick Fanning, Joel Parkinson, Bede Durbidge and Josh Kerr, with the industry expertise of head brewer Scott Hargrave, the minimalist, industrial style of Balter’s HQ in Currumbin offers a spacious and inviting spot to sample some of their award-winning craft beers. Tasting at Balter happens within sight of the brewing equipment itself, so guests are as close to the source as possible, not to mention the people who make it. It’s not just the beverages that draw people to Balter, however; a revolving roster of the region’s best food trucks are regularly parked up onsite. Burgers and hot dogs, pizza, tacos – you never know what you’ll find upon a visit to the brewery, but you can rest assured that it will be delicious. 4. Burleigh Brewing Co. While some might believe that the craft beer boom is a new phenomenon, Burleigh Brewing Co. has been going strong for over ten years, the home of world-class local beers spinning from the imagination of husband and wife team Peta and Brennan Fielding. One of the Coast’s brewing pioneers, the team shifted its operation in 2016 to accommodate growing demand. Featuring regular live music, local food trucks and award-winning wines, alongside the 24 operating beer taps, Burleigh Brewing is a vibrant and exciting place to settle in for an evening. Peta and Brennan also maintain strong connections to the locals, and have donated around $100,000 to community groups since their inception.

One of our favourite spots along the East Coast is actually across the border in NSW, but it’s an ideal rest stop for people on a longer road trip. Famous for its character and history as much as its output, the site of the Byron Bay Brewery has, as various times throughout its history, been a piggery, live music venue and now purveyor of top-notch tipples.

With six regular beer varieties on tap and an assortment of finger foods and meals, the Byron Bay Brewery has occupied its converted town house location, attracting a loyal cohort of locals and visitors along the way. There’s always something happening, so be sure to add it to your itinerary if you’re venturing south from the Gold Coast.

The team at East Coast Car Rentals want you to have the best road trip possible, and for those that enjoy the best food and drink the region has to offer, there’s no better departure point than our Gold Coast Airport location. Don’t miss out on some of the most exciting breweries in Australia – with a designated driver in tow – speak to East Coast Car Rentals today and take to the road in style.