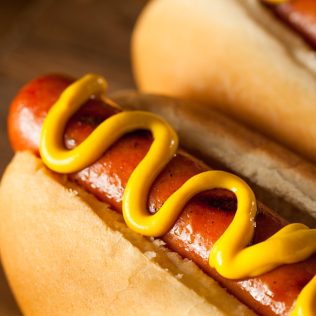 Served in a bun, straight on a plate or stuck with a stick, hot dogs can hit the spot. While they’re often enjoyed in the warm days of summer – in Australia and elsewhere – they’re devoured year round. True, America is perhaps the most well-known country for hot dog consumption – with a whopping 7 billion frankfurters pounded down in the U.S. between May and September, which is peak season, according to the National Hog Dog & Sausage Council – but Australia is in the conversation, as well. Indeed, the Land Down Under cracks the top 10 for countries with high hot dog demand, based on market research from Technavio.

Where can you go for the most divine dogs in and around Sydney? These locations are sure to satisfy and whet your appetite:

Founded on Cowper Wharf Road, a mere stone’s throw away from the Woolloomooloo Bay Hotel, is Harry’s Cafe De Wheels. Established in 1938 by Harry Edwards, this eatery is something of an institution, which has led to its expansion as other franchises are located at Darling Harbour, Newcastle, Haymarket and Tempe. Harry’s offers a wide assortment of taste-tantalising dishes that go beyond the bun, but for hot dog connoisseurs, regular visitors recommend the Pulled Pork Roll, Roast Chicken Roll and the Hot Dog de Wheels, which features a Vietnamese smoked frankfurter topped with peas, chili con carne and garlic onions.

Savoury pie lovers: This place is definitely for you. They’re packed with generous portions of lean topside beef, zesty herbs, spices and vegetables, none of which are frozen. Pie & Mash, Harry’s Tiger, Lean Beef & Curry are among the favourites.

Owned by the Merivale brand, El Loco may not seem like a place that specialises in hot dogs given its Hispanic roots, fiesta-like vibe and expansive list of Mexican food staples like tacos, carne asada and pollo frito. But those who frequent this Surry Hills eatery swear by the juicy and delicious frankfurters topped with mouth-watering complements like cheese, relish, mustard and pico de gallo. The chili cheese hot dog comes with chili con carne, jalapeños, tomato relish and a generous side of fries. Simply scrumptious.

Voted the No. 1 bar in all of Sydney for bar food, Stitch Bar is located conveniently on 61 York Street. While it opens at somewhat unusual times depending on the day – e.g. as late as 4 p.m. Monday through Wednesday – patience pays off, as the hot dogs are simply out of this world. Included in the “Dog Town” section of the menu, these dishes include the classic hot dog – made from Andouille sausage – lamb dog and Mack ducky dog, which is topped with truffle and garlic mayo and foie gras as a side. Of the dozens of reviews for this watering hole on FourSquare, several specifically cited the deliciousness of Stitch Bar’s hot dogs.

Unlike several other popular locations where there’s love at first bite, Riley St Garage is relatively new to Australia, opening in 2013 on the street for which it is named. As noted the restaurant website, the interior is inspired by New York City’s meatpacking district, with signature offerings that are quintessential to fine-dining, such as oysters, beef tartare and calamari. But Riley St also likes to serve the stick-to-your-ribs basics, and hot dogs fit the bill.

There’s lots to discover and even more to digest when it comes to hot dog dining options throughout Australia. Get your buns in gear and book your hire car today.