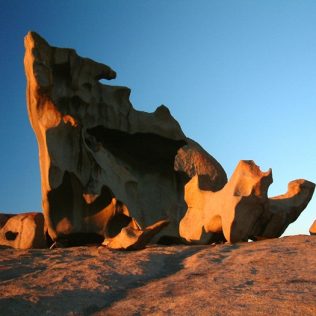 The wild attractions of Kangaroo Island

Despite the name, you’ll find a lot more to this island than just kangaroos. A veritable zoo when it comes to wild life, Kangaroo Island is Australia’s third largest offshore land mass and is home to animals, humans and some great experiences.

The best thing? With a ferry ready to transport you and your Adelaide hire car across to the island, you can easily include it in your East Coast road trip adventure.

Much more than a day trip

Don’t be fooled into thinking Kangaroo Island is a small stopover – with over 4,000 square kilometres of land to its name it’s a trip unto itself. Almost everything is on offer here. Just take a look:

Due to its distance from the mainland, the island is a refuge for Australia’s native animals.

Endangered Australian sea lions have a home at Seal Bay Conservation Park. Depending on the time of year, you can spot them feeding their young after long days spent in the sea, hunting for food.

At the western end you’ll find Flinders Chase National Park. It’s one of Australia’s largest areas of untouched bushland, and in it you’ll find koalas, tammar wallabies, long-nose fur seals, endangered Cape Barren geese and other wild life. Oh, and of course, the kangaroos the island is named after. Take a closer look at these ones though – you’ll spot that they have longer and darker fur than their counterparts just across the water.

Between its size, the lack of human intervention and the range of animals that call it home, Flinders Chase National Park is counted amongst the most significant South Australia has to offer.

In addition to the above, take the time to stare out to sea and keep an eye out for any dolphins amongst the waves.

East Coast Car Rentals is here to make sure you don’t miss out on anything. Book your hire car with us today, so you can set off on your unforgettable Australian road trip.