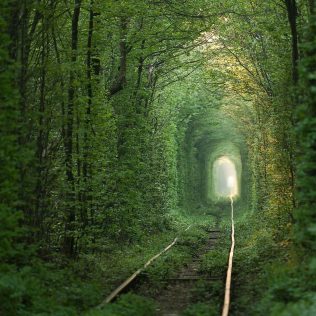 The weird and wonderful of hidden Australia: Part one

When most people  write their list of things to see and do in Australia, the first words that invariably appear are ‘Sydney Opera House’, ‘Uluru’ and ‘Great Barrier Reef.’ Though there is no question that these iconic sights deserve their legendary reputation, that doesn’t mean that there is nothing else left to see across this vast, beautiful and happily unconventional country.

In fact, there are plenty of strange yet fascinating sights to seek out across the Land Down Under, so grab the keys to your East Coast Car Rentals hire vehicle and prepare yourself for something of the surreal!

The Dularcha National Park is worth visiting for its resplendent beauty and epic hiking potential alone. The Park is not only home to nine endangered species, but also hosts the creepy Dularcha Rail Tunnel. This eerie tunnel looms out of nowhere to fascinate intrigued explorers.

The tunnel was originally built in 1831 so that commuters on the North Coast railways line had exemplary view of the verdant Queensland countryside, but when the tracks were realigned in 1932, the Dularcha Rail Tunnel found itself without a purpose. After stripping away the tracks, the decision was taken by the authorities to allow the tunnel to remain as a feature of the park.

Today, Dularcha Rail Tunnel exists to provide hikers with an interesting aside to their rambles through the rustic bush – as well as housing a colony of bats. Locals talk of hearing ghostly train whistles in the dead of night, rushing through the tunnel, but you shouldn’t believe them… or should you?

There are a great many strange yet fascinating sights to seek out across the Land Down Under, so prepare yourself for something of the surreal!

When Melbourne was first established, Coop’s Shot Tower rose above all the others to be named the city’s tallest building. The bullet factory is now but a garden shed in comparison to Melbourne’s soaring bricks-and-mortar monsters, but city chiefs didn’t want the historic structure to go out without a bang.

Hence, they did what anyone would do when it comes to looking after old buildings, and placed a giant cone of glass over it as protection from the elements, fully enclosing it. Now a new, if a little bizarre spectacle in itself, Coop’s Shot Tower resembles an enormous snow dome, only without the white stuff. Today, the monument is home to a museum regarding the factory’s history and the city of Melbourne itself.

Found just a short walk from Sydney’s popular Circular Quay, the Justice and Police Museum is something of a macabre oddity in Australia’s fun-loving largest city.

Inside, you’ll find mugshots of all of Australia’s murkiest villains from decades past, alongside actual crime scenes replete with original blood stains and other unmentionables. For the weapon fanatics among you, the Justice and Police Museum houses a vast collection of guns, axes, daggers, knuckle-dusters and even maces that have been confiscated from criminals of years gone by.

Maybe a concluding sentence rounding up the article would be good here?