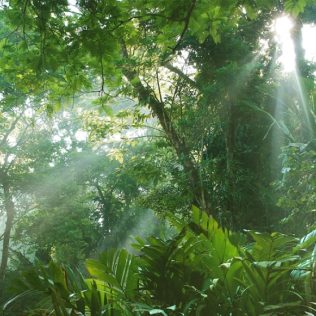 North Queensland: Paradise in the rainforest

January 31, 2018, East Coast Car Rentals Cairns, Fun, Road Trips, Tips, Unusual destinations to drive to
For a tropical North Queensland experience, hire a car in Cairns from as little as $27 a day and drive approximately an hour north to Port Douglas, along a winding coastal road offering views of the Coral Sea. You’ll notice on arrival, that this tropical part of Australia has been blessed with more than its fair share of natural attributes, including two UNESCO World Heritage sites. Most people are aware of the first – the Great Barrier Reef, the other, however, isn’t quite so well known even though Sir David Attenborough referred to it as the most extraordinary place on Earth. He was talking about the Wet Tropics, which cover a large part of the northeastern coastal region from Townsville to Cairns. There are around 40 impressive drives throughout the area, offering 100 scenic lookouts – a great reason to fill up the tank and hit the road. A living museum

The Wet Tropics is a living museum that houses an array of endemic animal and plant species.

Formed predominantly by rainforests, the Wet Tropics is a living museum that houses a vast number of animal and plant species, hundreds of which cannot be found anywhere else in the world. Over 200 million people flock here every year, and 20 Aboriginal groups have connections to this sacred land.

Mother Nature’s masterpiece One of the most impressive parts of the Wet Tropics is the Daintree Rainforest, which spans around 1,200 square kilometres. Less than a two-hour drive from Port Douglas, this rainforest is thought to be one of the oldest in the world, and you’re bound to spot birds and animals here that can’t be seen elsewhere. Start your exploration of this area at the award-winning Daintree Discovery Centre, where you can get some insight into the region’s prehistoric past, as well as the chance to experience the rainforest from all angles.

Bird’s-eye views Make sure you pack your car with sturdy, water-resistant shoes and insect repellent, all of which are necessary for rainforest exploration. The Daintree Rainforest Aerial Walk enables visitors to stroll through the mid-level rainforest canopy on an elevated walkway, which provides views of the abundant vegetation below. Another option for those wanting to learn more about the rainforest is an audio tour. Available in eight languages, these self-guided and informative tours provide information about different aspects of the forest and its inhabitants. Absolutely gorge-ous  The pristine Mossman Gorge is just a couple of minutes west of the small township of Mossman. It takes up the southern sector of the Daintree Rainforest, and here you’ll find the Mossman Gorge Centre, staffed by informative locals. The Kuku Yalanji people are the area’s Aboriginal landowners, and they enjoy sharing their history, culture and traditional cuisine with visitors.

One of the most raved about aspects of the Mossman Gorge experience is the Ngadiku Dreamtime Walk. These walks are lead by the Yalanji staff, and take people along bush trails flanked by tropical trees and flowers, past unadulterated streams to culturally significant sites. The rainforest has long been home to these indigenous people who recognise every plant here, along with their nutritional and medicinal value. After your Dreamtime Walk, try some local bush cuisine at the centre’s contemporary cafe, then check out the Mossman River, where fish and turtles can be spotted in the clear waters.

Let’s get salty If you’ve had enough humidity to last you a while, hit the road again and take a 50-minute drive south along the Captain Cook Highway to Clifton Beach for a refreshing dip in the ocean. Make sure you take turns driving, and stop-off for some Insta-worthy photo opportunities to ensure that everyone in the car is able to experience the spectacular coastal views. The drive back to Cairns from Clifton Beach only takes about 30 minutes, and you can drop off your car in the city anytime before 10 p.m.!