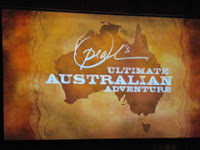 Oprah Winfrey kicked off her final season of her show in spectacular fashion with the announcement that she will be heading to Australia in December.

Winfrey will host two episodes of her hit show from Australia, including a special Sydney “Oprah” house show on December 14. The talk show queen has chosen 300 lucky viewers to fly with her from the US to Australia for an eight-day, all-expenses-paid holiday, which has been dubbed Oprah’s Ultimate Australian Adventure.