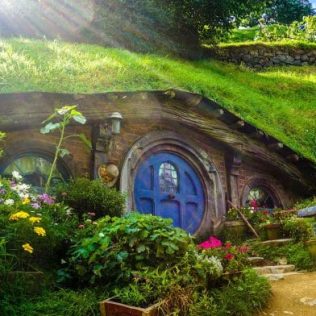 Get ready to tick off these New Zealand North Island tourism hot spots!

Not only is New Zealand home to some of Planet Earth’s most jaw-dropping landscapes and action-packed activity destinations, it’s also a country brimming with world-recognised tourist attractions.

With your East Coast Car Rentals’ hire at the ready, print off our ultimate New Zealand North Island bucket list and start ticking off the following tourist destinations!

Just under a three-hour drive from Auckland CBD

Take a journey to where Frodo’s journey began and prepare to have your own Middle Earth adventure when visiting Hobbiton – the original movie set for the Lord of the Rings (LotR) and Hobbit blockbuster films.

When scouting for locations ready to film the first LotR movie (The Fellowship of the Ring) back in 1998, Kiwi director Peter Jackson and team stumbled across a sheep farm in the Waikato region and immediately knew they’d found their hobbits a home. From here hobbit holes, recreational areas and inns were built across the 12-acre farm which were all featured in the films.

In 2002, Jackson opened the doors to the set, allowing fans of the series to explore this magical area in all its glory.

Take your photo outside Samwise Gamgee’s home, spin round the maypole, and have a beer in The Green Dragon pub that was once frequented by Frodo Baggins and his mischievous Hobbit friends.

A post shared by Hobbiton Movie Set (@hobbitontours) on

Around a three-hour drive from Auckland CBD

You’ll know you’ve arrived at Hot Water Beach by the cluster of people frantically digging within a 20-metre radius on the sand. Come rain or shine, people flock to this natural wander in a bid to dig their very own hot pool, made possible by the thermal activity below the sand which causes the shallow surface water to become heated.

Whether you’ve come prepared and bought your own spade or hired one at the nearby cafe, find yourself a spot and get to work! It shouldn’t take long to reveal the hot waters, but be careful before sinking down into the bubbling water as temperatures can reach up to 64 degrees Celsius!

It’s important to note that digging can’t commence when the tide is in, so be sure to check the day’s tide times before setting off.

A post shared by The Travellers Journal (@the.travellers.journal) on

Around three and a half hours from Auckland CBD

New Zealand is widely recognised for its dramatic landscapes, with the mighty kauri tree a major feature of these lush vistas. Having been around for 20 million years, and reaching ages of 1,000 years plus, the kauri are some of the longest-living and largest trees in the world.

However, there’s one kauri that’s bigger than the rest – the Tane Mahuta. Standing a whopping 51.2 metres tall, the ‘Lord of the Forest‘ can be found in the Waipoua Forest in the Northland region. According to Maori legend, Tane is the son of Ranginui (the sky father) and Papatuanuku (the earth mother), and all living creatures in the area are regarded as his children. The walk to Tane is a short boardwalk from the carpark, leading you through native New Zealand bush.

The kauri population in New Zealand is unfortunately under a threat of destruction due to the kauri dieback disease. To reduce the risk, always wash hiking gear, and spray footwear with disinfectant found at forest entrances.

Just over a four-hour drive from Auckland CBD

Get ready to immerse yourself in a kaleidoscope of colour when visiting the thermal wonderland of Wai-O-Tapu – and be sure to hold your nose too! The geothermal park is home to an array of naturally coloured hot springs, deep volcanic craters and gushing geysers that can be visited 365 days of the year! While all are breath-taking and beautiful, the high levels of geothermal activity means that the park is extremely pongy – but don’t worry, you’ll get used to the funky smell in no time.

The park features a variety of boardwalks that lead visitors around the many sink holes and springs, which take around 35-70 minutes to walk round. Make sure your first port of call is the Lady Knox Geyser, which erupts daily at 10.15 a.m. and reaches heights of up to 20 metres!

Once you’ve seen all of the natural beauty on offer at Wai-O-Tapu, make the short drive into the centre of Rotorua and check out what this vibrant town has to offer before heading back to the City of Sails.

There’s so much to see and do in this wonderful country, so don’t miss out on visiting these incredible places. Contact the team today to secure your Auckland car hire, ready for all of your New Zealand adventures.