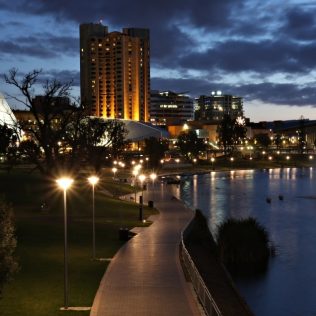 Like pineapple as a pizza topping, Adelaide is underrated as a city. Whether it’s comedians making snarky jibes, or the word ‘boring’ being frequently heard before the city’s name, Adelaide gets a bit of a bad rap. We’re here to set the record straight – there are a number of fun and interesting things to do in Adelaide that you’re in danger of missing out on if you continue to believe the negative buzz.

Not convinced? After reading about them in the words that follow, we’re sure you will be ready to hire a car in Adelaide and start exploring!

Boat along the Murray River

While not within the city of Adelaide, the Murray River is only an hour’s drive away, making it close enough to be included on this list, according to subsection J-1.3 of our strict List Making Handbook.

For those of you that are navigable river enthusiasts, you will be pleased to hear that the Murray River is the third longest in the world, behind only the Nile in Egypt and the Amazon in Brazil.

One of the coolest things you can do on the Murray River is go on a boat cruise. If you have that special someone with you on your trip, a reenactment of everyone’s favourite bow-based scene from Titanic could be in order. The captain of your boat will ensure that no other scenes from Titanic are reproduced.

Let’s be real – how could you pass up the chance to boat along a river with a name like ‘Murray?’ It’d be like being offered a visit to the Trevor forest, or the Darryl falls and saying “Nah, I’m good thanks.” Ridiculous. Go swimming with sea lions The Port Lincoln Marina is home to a company called ‘Adventure Bay Charters’. Among their many tourism offerings, swimming with sea lions would have to top the chart in terms of fun factor.

After boarding the boat, you’ll spend half a day at Seal Cove, getting up close and personal with the sea lions. Wetsuits, snorkels and fins are all provided, so the only thing you need to bring is your swimwear. Unlike regular lions, sea lions are extremely friendly creatures – sometimes known as the ‘puppies of the sea’, they love to play along with swimmers and are welcoming of the company. See the Big Rocking Horse I don’t need to tell you why should see this.

It can be found in the small town of Gumeracha, about a 45 minute drive out of Adelaide.

When it comes time for Secret Santa, all of the zoo animals hope they get Wang Wang.

Found in the heart of the city, Adelaide Zoo is one of Australia’s oldest. A vast array of animals can be seen here, but the highlight would have to be the giant pandas, Wang Wang and Fu Ni. They are the only two giant pandas in the entirety of the southern hemisphere. They are both part of the international research and breeding program that aims to protect the species from extinction.

When it comes time for Secret Santa, all of the zoo animals hope they get Wang Wang – he’s easy to buy for, as his favourite thing is a cardboard box full of sawdust, according to the Zoo’s website. Fu Ni, on the other hand, is a different story. Getting something for her on a five dollar budget is harder than a sackful of bricks.

By now, you must be thinking that a trip to Adelaide is in order. If not, go back to the beginning of the article and read it again. We’ll wait for you to get back to this point … welcome back! Now that you’re thoroughly convinced, the next step is to decide how you’ll get around the place. The team at East Coast Car Rentals would like to humbly suggest that hiring a car from us is a top idea. Car hire in Adelaide is easy when you know who’s the best in the business (hint: it’s us!)