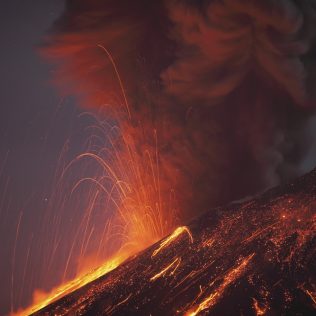 A day trip to the Undara Lava Tubes

When you think of Cairns, the first images that spring to mind are probably the gorgeous beaches of Australia’s east coast, flanked by the utterly incredible Great Barrier Reef. That’s not particularly surprising, with the coastline being one of the country’s top tourism destinations and most well-known attractions. Everything has it’s opposite though, and if you’re looking for something a little bit hotter, it’s hard to go past the Undara Lava Tubes.

As exciting as the name suggests, these otherworldly tunnels are one of a kind, and you can find them a few hours drive inland from Cairns. Read on to find out more.

With Undara located a little under four hours southwest of Cairns, the journey takes you through a shifting kaleidoscope of the very best that Queensland’s scenery has to offer. As you depart the city, you’ll find yourself passing along the edge of two natural parks – Danbulla and Gadgarra. These lush forests showcase the northern part of the state’s tropical climate, with plenty of greenery and natural life.

Continuing on, these forests will slowly recede, giving way to the simple splendour of the Australian outback, with patches of dense scrub, creeks and volcanic flows. You’ll pass through another natural park, one of the country’s best – the aptly named Forty Mile Scrub. From here, it’s less than an hour to Undara, where the real fun begins.

As you might have guessed, Australia is spoilt for choice when it comes to natural parks. Even with so many of them dotted around the place, there’s nothing quite like Undara.

The area was shaped by an immense eruption some 190,000 years ago (but who’s counting). Undara, a massive shield volcano, let loose a torrent of molten rock which grew to stretch over a distance of more than 160 kilometres. Estimated from the Department of National Parks, Sport and Racing put the total amount of lava at 23.3 kilometres cubed, which spread at a rate of 1 km cubed every second. Now that’s a truly frightening sight to imagine!

As the surface of the flow cooled, the higher temperatures inside meant that long tunnels became formed through the core. When all was said and done, one of the longest lava tube systems in the world was all that remained. A trip through these surreal pathways and corridors is truly awe-inspiring, and well-wroth the trip from Cairns. There’s plenty to see in the surrounding area too, so why not stay overnight and make the most of the experience.

For more information on car rental and road trips near Cairns, get in touch with East Coast Car Rentals today.