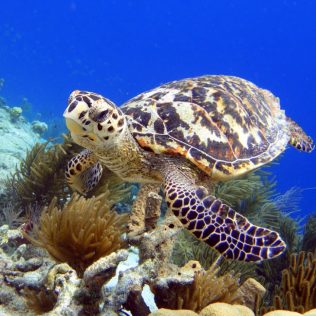 Animal-loving Australians are spoiled for choice when it comes to the sheer amount of options for wildlife interaction that the country has to offer. These three animals are some of the most exciting and unique creatures in the world and you can meet them right here in Australia when you traverse the East Coast for a summer road trip.

From cute and cuddly, to cute and scaly to just plain old cute, Australia’s wildlife is fascinating and diverse.

From cute and cuddly, to cute and scaly to just plain old cute, Australia’s wildlife is fascinating and diverse. Find out where you can meet three of the country’s most adorable residents for yourself.

Every single person living on the east coast needs to make a trip to Cairns at least once in their lives, if only to encounter the magnificent sea turtle. Yet another testament to the country’s vast biodiversity, Australian waters are home to six species of sea turtle. To put this into perspective, there are only seven species of sea turtle in the entire world.

The six species of turtle are called the green turtle, loggerhead, flatback, hawksbill, olive ridley and leatherback. You’ll find every single one of these turtles at Queensland’s Great Barrier Reef, according to the Great Barrier Reef Marine Park Authority. Schedule a snorkelling or diving trip and your chances of meeting one of these majestic animals is very high.

While they’re not necessarily interested in humans they’re definitely not shy either, but be careful to follow all instructions about what to do should you meet one (i.e. no touching!).

A photo posted by darren muschett (@darren_muschett) on

Koalas Australia’s most iconic animal is also its fluffiest, which we don’t think is a coincidence. Despite their name, koalas aren’t actually bears, they are marsupials, which means they carry their young in pouches after giving birth. Baby koalas, such as Archer from Featherdale Wildlife Park in Sydney, stay with their mother’s for up to a year after their birth, hiding in their pouches or clinging to their backs. Interestingly, koalas don’t drink very much water. They get most of their hydration from eucalyptus leaves, which are their main source of food, with each animal eating about 1 kilogramme a day, according to National Geographic. Sadly, hunting and deforestation has resulted in decreasing numbers in the wild, making them a threatened species. While koalas in the wild tend to live in western Australia, where the eucalyptus trees they gorge themselves on grow, there are numerous koala sanctuaries dotted all over the east coast. Besides Featherdale, Lone Pine in Brisbane is a particularly fun sanctuary for those looking to get a koala hug.

A photo posted by Koala (@koalasgram) on

Dolphins Not only are dolphins incredibly intelligent, they’re also one of the few animals that are said to be able to feel empathy. Certainly, there have been many cases of positive dolphin and human interactions – one story even tells of a pod of dolphins saving a group of swimmers in New Zealand from a shark. In addition to this, dolphins are incredibly curious about humans. Unlike koalas which will hold onto anything sturdy and sea turtles, who tend to ignore us or flee, dolphins will actively come and check you out, making swimming with them all the more fun! Whether you’re looking for a unique first date activity or just a chance to hang out with some of the ocean’s friendliest inhabitants, the east coast is the place to do it. Tours like Red Ballon, just 3.5 hours from Sydney offer exciting encounters with these creatures. Hire a car from the city then head out for your marine moment!

A photo posted by Dolphin Swim Australia (@dolphinswimaustralia) on